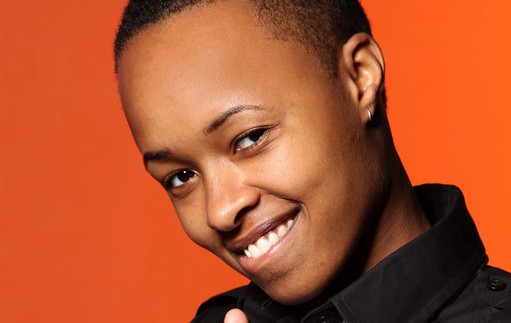 Poet, Activist, Human
Involved with Intermedia Arts since: 2005
A poet and emcee, Tish Jones speaks to communities about controversial topics through her lyrical art. Inspired at an early age, her love of people and her pursuit of truth have made her a vital part of the Minneapolis arts scene. Over the years, her name has become synonymous with leadership, community, and authenticity.
How did you become an artist?
My 2nd grade science teacher created an after school program for students who had good grades and would finish their work early. It was a theatre group. We had the opportunity to do either a “murder mystery” type of play or “Rap-punzel” a hip-hop version of the original. Knowing that there was a kind of art that I could connect to and create for others to connect to is probably what started me as a poet and emcee.What inspires you?
Real life. Love. Truth. God. Hurt. Joy. Words. People.How can art be a tool for speaking out, for creating change in the world? How have you used art to do that?
Because most of what people are hesitant to speak out about is an ugly truth. Art helps make it more appealing. It allows people to see the beauty in it. I have used my words to paint those same harsh truths into sound waves. I have also used my art to unite people in the truth and bring one community, many different communities, or one hope/dream together so they could be the art.

How has Intermedia Arts been a part of your story?
Intermedia Arts was the very first place that I was invited into during one of the most important transitions in a young person’s life: the move from teenager to adult; the graduation to “what now”. I went from the theatre in my high school to the stage of Intermedia Arts’ B-Girl Be: A Celebration of Women in Hip-Hop, and have had a home and artistic support system at Intermedia Arts ever since.

“Most of what people are hesitant to speak out about is an ugly truth. Art helps make it more appealing.”
– Tish Jones

What is one of your favorite experiences with Intermedia Arts?
I think I would have to say B-Girl Be 2007. There were so many powerful women in the same space showing so much love. It was one of the most beautiful things I have ever been able to be a part of. I gained family that year. When we bump into each other in other states it’s like seeing a long lost relative. I think my favorite experience with Intermedia still lives.

How has art changed you?
Art makes me excited about life and how I can change it for myself. It helps me make my own days better. It has made me excited about learning, just so I can use what I learn in my art.

The founder, executive, and artistic director of a developing non-profit arts organization called TruArtSpeaks, TISH JONES teaches performance art and creative writing in schools, libraries, art centers and prisons throughout the Twin Cities. She is a spoken word artist, activist, educator, and organizer from St. Paul, MN. Tish was a 2009 recipient for both Intermedia Arts’ VERVE Grants for Spoken Word Poets, and the MN Urban Griot Award for Female Spoken Word Artist Of The Year. In 2009, Tish also collaborated with filmmaker Rachel Raimist on a spoken word and film project funded by the Minnesota State Arts Board, “State of the Cities”. Well-known for her role in community partnerships throughout the Twin Cities, Tish has organized and produced dozens of events throughout the Twin Cities. Tish was named one of the City Pages “Artists of The Year” along with mention in the Star Tribune as an “Artist on the Verge” in 2007. Tish has performed on many stages, locally and nationally, as both an independent artist and as a member of Minnesota’s state slam team in 2006.