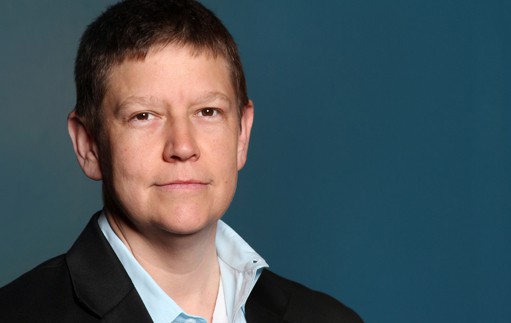 Multimedia Artist, Activist, Community Organizer
Involved with Intermedia Arts since: 1994
Producer and pioneer of the Vulva Riot Cabaret, Eleanor Savage came to Minnesota in 1990 and has been a strong voice in the Minneapolis GLBT community since. After curating at The Walker Art Center for many years, Eleanor is now a program officer at the Jerome Foundation, helping to create opportunities for emerging artists, and continues to be an advocate for social change in the community.
How did you become an artist?
I have always been a lover of art though access was limited in the rural community where I grew up. I didn’t become involved in art-making until college. As a psychology major, I was introduced to the power of art as a tool for community organizing. Then I became involved with the theater department and visual arts department in my search for like-minded souls. I eventually expanded to a double major in theater as well as psychology. My excitement in exploring art and social justice led to my career shift from psychology to the arts.

What inspires you?
Life. The daily joy and pain, the unexpected and the usual, the beautiful and the tragic, the passion and the mundane. Art reflects the whole experience of humanity.

How can art be a tool for speaking out, for creating change in the world?
The focus of my artistic and activist work shares Intermedia’s belief in the power of art to build understanding among communities. Art, like spirituality, transcends material reality. It has the potential to dissolve the lines that divide, penetrate through entrenched ideas based on a lack of information.

How has Intermedia Arts been a part of your story?
I began working with Intermedia Arts as a curator in the 1990’s. I created two series focused around discussions of gender: The Genders That Be and Crossfire: A Journey Through Gender Mayhem. Both of these were month-long series of visual and performance work exploring gender identity and transgender experience. I joined Intermedia Arts’ board of directors for two-terms. I also developed the Naked Stages program, a nine-month mentorship program for emerging performance artists. For ten years, I produced a monthly performance cabaret at Intermedia Arts, Vulva Riot. This event was a successful community-organizing platform that brought together hundreds of queer women artists across differences of race, class, age and culture. Intermedia Arts has been an inspiration, a home, and a partner in most of my creative and social justice work.

“Art, like spirituality, transcends material reality. It has the potential to dissolve the lines that divide, penetrate through entrenched ideas based on a lack of information.”
– Eleanor Savage

What is one of your favorite experiences with Intermedia Arts?
The magic of Intermedia is that I experience a favorite moment every time I go. I’ve seen hundreds of performances and exhibitions. I hope to see hundreds more.

How has art changed you?
Art is woven into the daily fabric of my life. Most of my community, family, and friends are artists. My professional work has always involved working with artists. I seek art as a source of inspiration and information. Art is reminds me of what I know and pushes me to places I’ve never been.

ELEANOR SAVAGE is a Program Officer at the Jerome Foundation, a foundation that supports emerging artists.  She previously was the Associate Director of Events and Media Production at the Walker Art Center for sixteen years.  Eleanor founded and was Program Director of Intermedia Arts’ Naked Stages program for nine years; this program supports the creative development of emerging performance artists.  She has produced and curated many community-focused events through Intermedia Arts, Walker Art Center, and KFAI radio. She is a civic-minded media artist and activist and has produced work with many Minneapolis and New York performers and choreographers, including Cheryl Dunye, Christian Marclay, Bill T. Jones, Morgan Thorson, Hijack, Shawn McConneloug, Pauline Oliveros, Holly Hughes, Lisa D’Amour and Split
Britches.