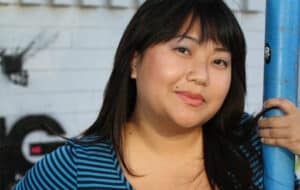 Writer, Performance Artist
Involved with Intermedia Arts since: 2008
May Lee-Yang is a playwright, poet, prose writer, and performance artist. Born in Ban Vinai, a refugee camp in Thailand following the Secret War in Laos, May moved with her family to Saint Paul, MN where she lives to this day. Her work often explores the lives of Hmong women and living in a bicultural world, and she has been hailed by Twin Cities Metro Magazine as “on her way to becoming one of the most powerful and colorful voices in local theater.”
How did you become an artist?
When I was a kid, my parents didn’t let us out much. This was the early 1990s and they were afraid my siblings and I would be recruited as gangsters. Stuck at home, I watched a lot of TV, played a lot of videogames, and read a lot of books. I began writing in junior high school and always imagined I would pursue this career choice even on the side. Over the years, I’ve moved from writing to also doing performance work. I’ve also become more socially conscious about the world around me and seen how art can be used as a means to explore some of these issues.What inspires you?
Observations of the people and happenings around me. Conversations. Food. Things that don’t make to me. Invisible rules and invisible people.How can art be a tool for speaking out, for creating change in the world?
I’ve found art to be a safe way for people to enter into conversations about issues impacting our world. My work isn’t always about pounding messages or being didactic.  Being Hmong American, I am living in a time where much of Hmong American art is in the birthing process. This is a challenge and an opportunity that I’ve embraced. In the larger scheme of things, there haven’t been great representations of contemporary Hmong American art and my voice is just one of many that are filling that void in representation. I’ve also found that my art work begins conversations—conversations that people may have been having in their heads or in the privacy of their homes. Suddenly, these conversations become a public dialogue that reveal these people’s passions, fears, hopes, and the possibility of creating change at their own level.  As an administrator, I’m also passionate about creating the space for others to tell their own stories in their own words. I don’t believe that art is something created by a privileged few. It can be created and consumed by everyday people.How has Intermedia Arts been a part of your story?
I joined the Intermedia  Arts family in 2008 when I was selected to participate in the Naked Stages program. Through Naked Stages, I created my first solo show, The Child’s House.Since then, I’ve returned to Intermedia Arts to do two other productions—Confessions of a Lazy Hmong Woman(as part of Intermedia Arts’ Catalyst Series) and Ten Reasons Why I’d Be a Bad Porn Star(through the MN Fringe Festival). I’ve also come to Intermedia’s space as a writer, theater artist, community liaison, friend, and general supporter of the various shows, exhibits, and programs taken place there.
“Art has become a vehicle for me to express myself and find connections to others in the world.”
– May Lee-Yang

What is one of your favorite experiences with Intermedia Arts?
In the last year, I attended the Potluck of Ideas and was very intrigued by how this space that I know so well was transformed. The exhibit hall suddenly became a lounge, the main hall a dining room, the walkway to the theater a space that invited ideas, and the theater itself was re-imagined with lights. It reminded me that you can always put your stamp on something that already exists.

How has art changed you?
For me, art is not a hobby nor a means of making a living. I enjoy what I do and am fortunate to have the funding to do it; however, I see art as a way of life. Whether I’m working in literature, theater, or even dreaming about film projects that may never exist, art has become a vehicle for me to express myself and find connections to others in the world.

What do you see as Intermedia Arts’ role in the community?
For me, Intermedia is a place where people from different walks of life converge—sometimes together, sometimes apart—but all with the purpose of creating, supporting, or nurturing different people’s stories. Intermedia is also a place of experimentation where people and projects are birthed or workshopped for the next stages in their life.

May Lee-Yang is a playwright, poet, prose writer, and performance artist. She has been hailed by Twin Cities Metro Magazineas “on the way to becoming one of the most powerful and colorful voices in local theater.” Her theater-based works have been presented at Mu Performing Arts, the Center for Hmong Arts and Talent (CHAT), Out North Theater, the 2011 National Asian American Theater Festival, the MN Fringe Festival and others. Her most recent works  include Confessions of a Lazy Hmong Woman and Ten Reasons Why I’d Be a Bad Porn Star.  She has received grants from the Minnesota State Arts Board, the National Performance Network, the Midwestern Voices and Visions Residency Award, the Playwright Center, the Loft Literary Center, and is a winner of the 2011 Bush Leadership Fellowship. In her 9-5 life, she works as the Executive Director of Hmong Arts Connection, a non-profit based in St. Paul, MN.